On March 4, 2017, Victor Wooten gave a “free to the public” seminar in King Of Prussia, Pennsylvania.

Like a child speaking… learning to communicate in English… how many hours a day did you practice?

If you are playing bass, you are the rhythm. You need time. Listening to timing is more important than techniques, notes and scales. There is no such thing as a wrong note.

Victor was born the youngest of five brothers. The brothers already had a band — guitar, sax, drums and keys — but, they needed a bass player. Victor first learned to play. His brothers encouraged him to just play. Later, he taught himself how to play bass on a four-string guitar.

A question was asked, “I teach music to K-5… how can I teach the children to improvise?”
A: Have them try to play the wrong notes. 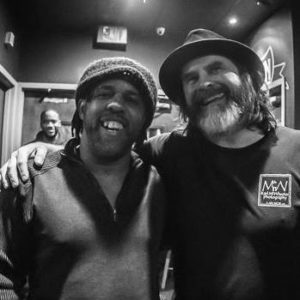 Brad Rau:
What an amazing gift the universe gave me for my birthday. I got the Jason Vieaux a few weeks ago and now Victor Wooten. At one point Victor without looking asked someone to turn any string they wanted out of tune. The he jumped right into playing (be myself by sly) quickly realized the G was tuned down a whole step and starting playing the line up two frets so he ended up playing in tune. They tuned back to normal without missing a beat. You had to be there.