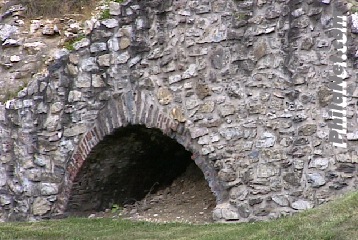 Did you know that before they discovered lime in Plymouth Meeting, PA... they had to crush oyster shells? The following footage was shot at the corners of Butler Pike, Germantown Pike and Chemical Road. 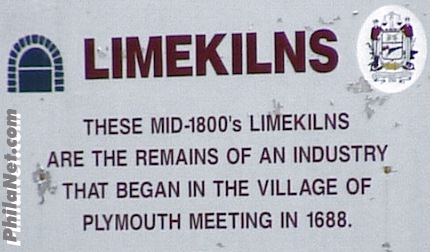 With the discovery of lime in Plymouth, the Ridge Road (which originally started at the Falls of Schuylkill, near the mouth of the Wissahickon, and finished in Whitemarsh) was to extend east to "Liberties" -- 6th & Market Streets, Philadelphia, in 1707. The road, by then, was making its way toward the Perkiomen Creek. The current "7 Star Inn" was built in 1718 near Royesford, and marks the year 1720: the year the road made its way there.

By the 1730's, Ridge Road was called, "The Great Road from Philadelphia to Reading." Not long after, passenger stagecoaches were operated between the points. Many inns were built along the road for the weary traveler. The old "Buttonball Inn" in Roxborough (now an office building) maintains it's mid-1700's appearance. With the need to transport goods from all the farms along the Ridge, nearby Wissahickon Creek mills and various ore mines, Ridge Road was heavily traveled and difficult to maintain. The rocky, turbulent Schuylkill River was only navigable when waters were high, and; those who risked transporting goods in "long boats" often hit rocks and lost their cargo. It would not be until the close of the century that the Schuylkill Navigation Company would be formed. Ridge Road would not be paved until 1811.

Life of the Roxborough Quakers was very hard. All were up at the crack of dawn to work the farms and mills. The Native Americans, who were also in the area, were sharpshooters with bow and arrow. They hunted local game for trade, as well as, being sought out for organic cures to illnesses. A healthy woman could bear 15 children and be lucky if 5 survived to adulthood (since a simple strain of influenza could rid several.)

Many types of grain (primarily corn and wheat) were grown and milled into flour at several Wissahickon gristmills. Flax plants were grown to produce linen, which was used for making clothing and paper. The seeds were milled into linseed oil (at oil mills), which was used for tanning leather and to make paint when added to dried berry pigment. Many of Main Line-Philadelphia's "old money" are descendants of Wissahickon mill owners and Roxborough plantation owners. The majority of Roxborough's population was German; however, many of the mill owners were British. They both consumed a lot of pork, but the British would store and eat root vegetables during the winter. The Germans mostly ate grains. There was also a large Swedish population in Philadelphia. In 1689, William Penn had a census taken and found about a thousand Swedes; nevertheless, the Germans outnumbered them greatly in a short span of time. The Welsh were prominent across the Schuylkill in Merion Township.

Most everyone attended Quaker monthly meetings, some at the Mennonite Meetinghouse in Germantown and others at Abington Meeting House. Besides listening to preaching, one could also get married there or buy/order goods (especially at Abington). For instance, in 1720, a box of 24 hand-made nails cost one silver shilling. A day's labor was 3 shillings (English currency). Some citizens were members of Christ Church in Liberties and some belonged to Old Swedes Church in Queen Village. One of the Scottish Wissahickon mill owners, Andrew Robeson, married Magdelin Rudman, a local Swede at Old Swedes Church.

In 1789, some of Roxborough's Quakers organized Roxborough Baptist Church. The church maintains a graveyard originally belonging to the Levering Family with graves dating back to the 1740's. Even today, just about all of the churches along Ridge Avenue are Protestant, as they were organized by Quakers. Roxborough had a group of Tunkard Baptist Monks who lived in a monastery and had close ties with other Tunkards in Ephrata, PA. The monastery still stands along with its working stables that date to 1745. Roxborough's first public school was the Levering School, dating back to 1748 (and, since demolished.) Philadelphia's oldest schoolhouse is on the corner of Wises Mill and Shawmont Avenues in Roxborough and dates to 1812.